Nothing much happens from one day to the next in the Barranco. It’s normally so peaceful, with the vecinos quietly getting on with tending their land and caring for their animals; and so when something does happen that requires a crane, it is something of note! That has happened twice now this year.

The first crane was required last January by Andre and Isobel.  There had been an exceptionally good olive crop. The pair had worked really hard for more than a week, spreading nets below their trees and beating with sticks to dislodge the olives. 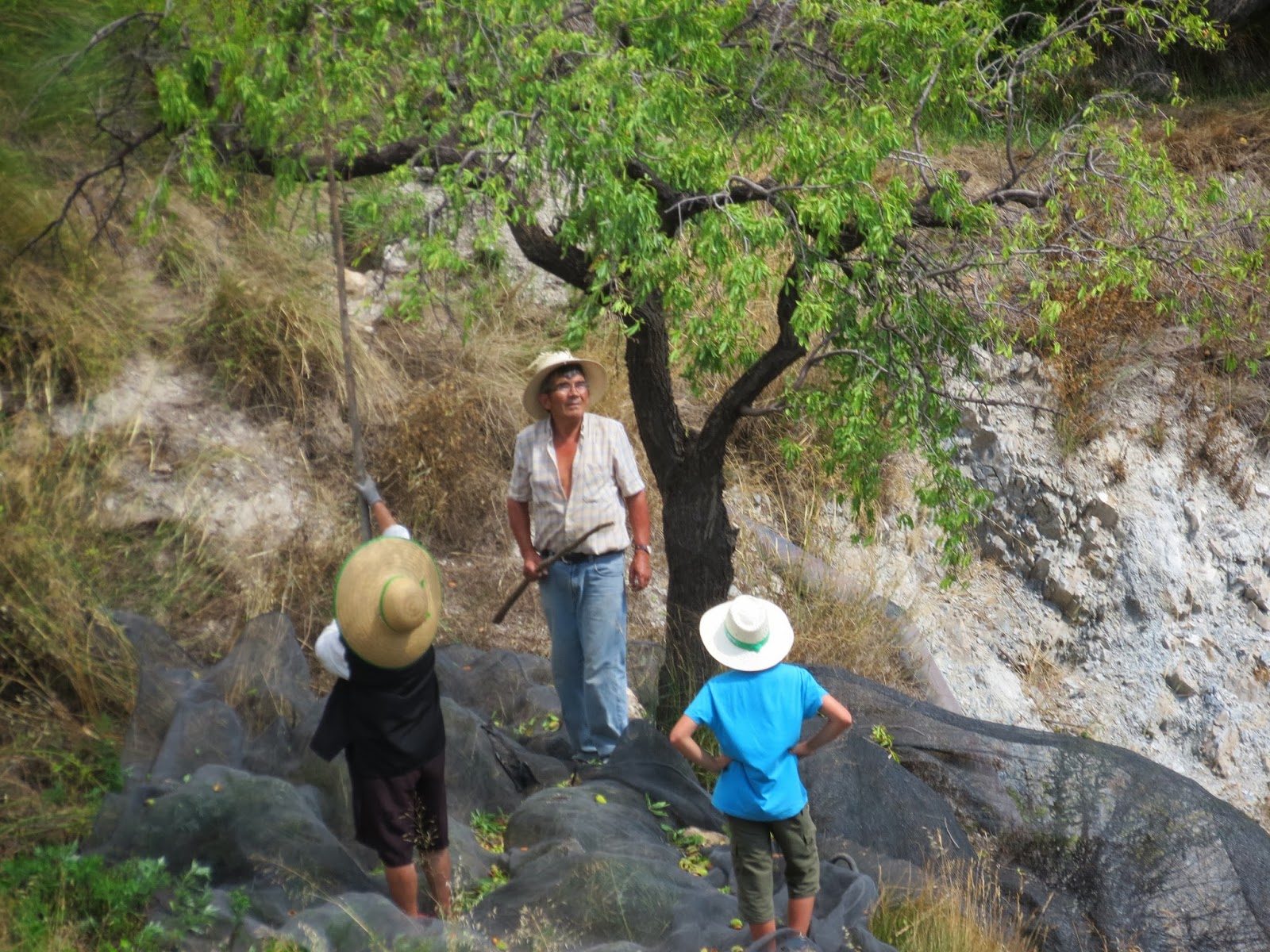 These were then loaded into a large canvas container, and when the container was full and the harvest complete, a lorry with an onboard crane arrived at their casa to haul it onto its rear for transport down to the olive oil factory in Albox. They had over 1000 kilos of olives, which made many litres of oil, that were mainly sold to the factory. We were fortunate enough to receive a large bottle as well. 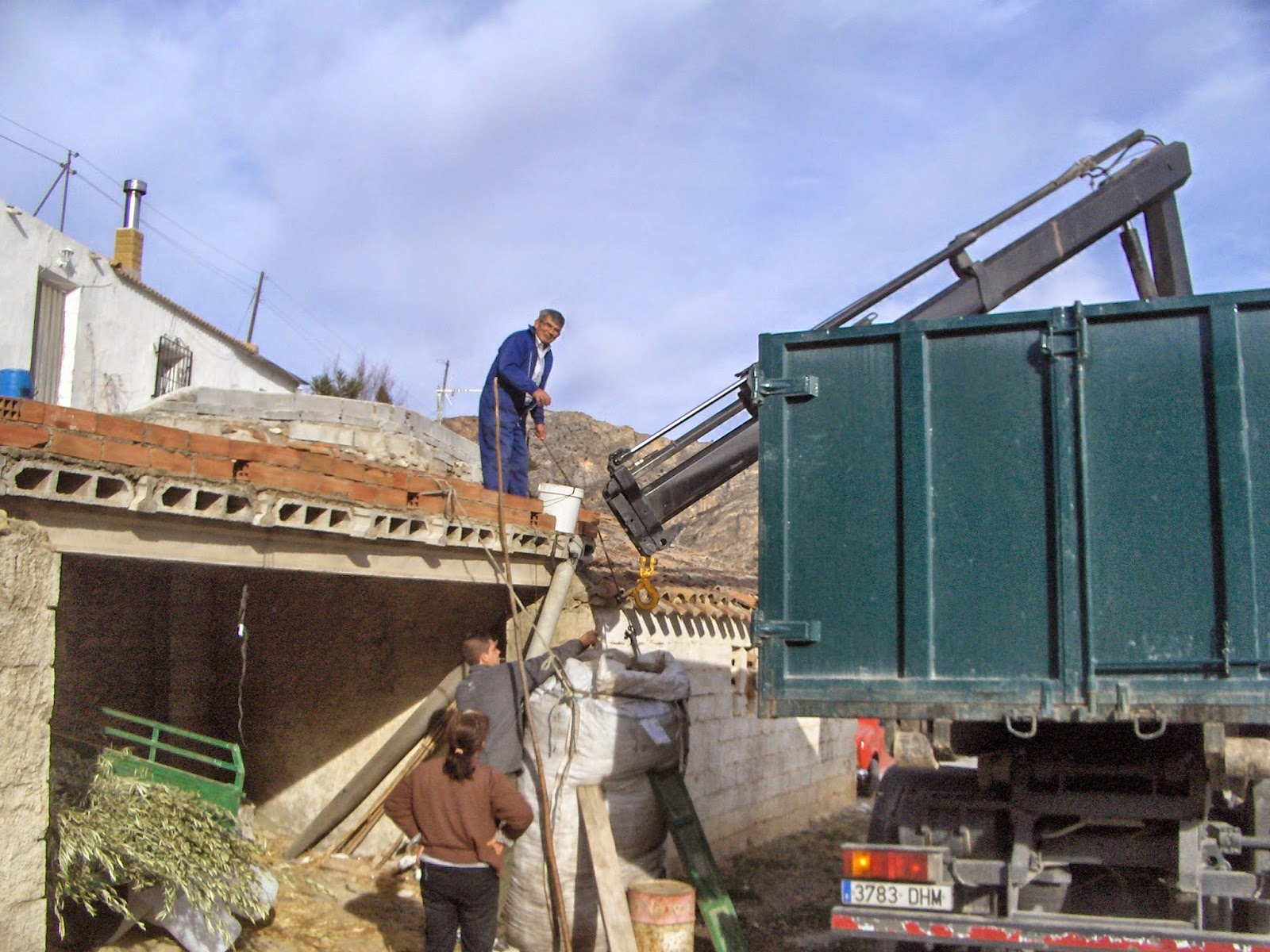 Then, for one weekend of the year, the Barranquillos assemble from all parts of the globe, to meet up with extended families and friends for the annual fiesta. It is the one weekend of the year when we can walk home to Casa Erizo from the “bar that never shuts”; after enjoying music, dancing, games, paella and tapas. This year the Fiesta is in August, and I’ll tell you all about it then, but preparations have been going on to improve the fiesta site for several weeks now, and today a crane was needed to help complete the work.

Shade for the fiesta is essential, and normally a collection of tarpaulins are rigged over the rough concrete base of the fiesta site. This year though there has been much work initiated (I think by the Town Hall – there are elections next year, and last time they only won by 2 votes), to create a new attractive patterned floor surface; with safety rail; ramp to the stage; built in seating; and most impressively of all a huge decorative canopy frame for the material that will provide shade. So once again this year a crane appeared in the Barranco to suspend the canopy on metal stilts, while they were welded securely into position.

A couple of weeks ago, after several months of virtually no rainfall, we had a ferocious storm, with thunder, lightning, torrential rain and giant hail stones. The mountains turned a January white in June and the caminos became rivers. The main dry river bed rambla, ran half a metre deep with muddy water, all the way to the Ria Almanzora.

While we were taking in this spectacle, we spotted a lone golden eagle struggling high in the sky against this deluge.

Now I am very sorry to report that the Barranco has one fewer golden eagle; because while out walking the dogs this morning, they found its shrunken body.

I collected some of its still beautiful feathers. 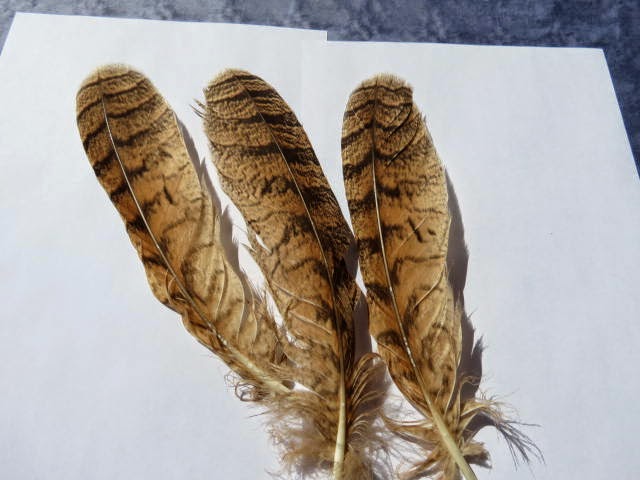 Hopefully, new birds will take its place. I remember well the day we climbed up the mountain and witnessed a dozen young golden eagles departing on their annual migration. Perhaps one of those will return. 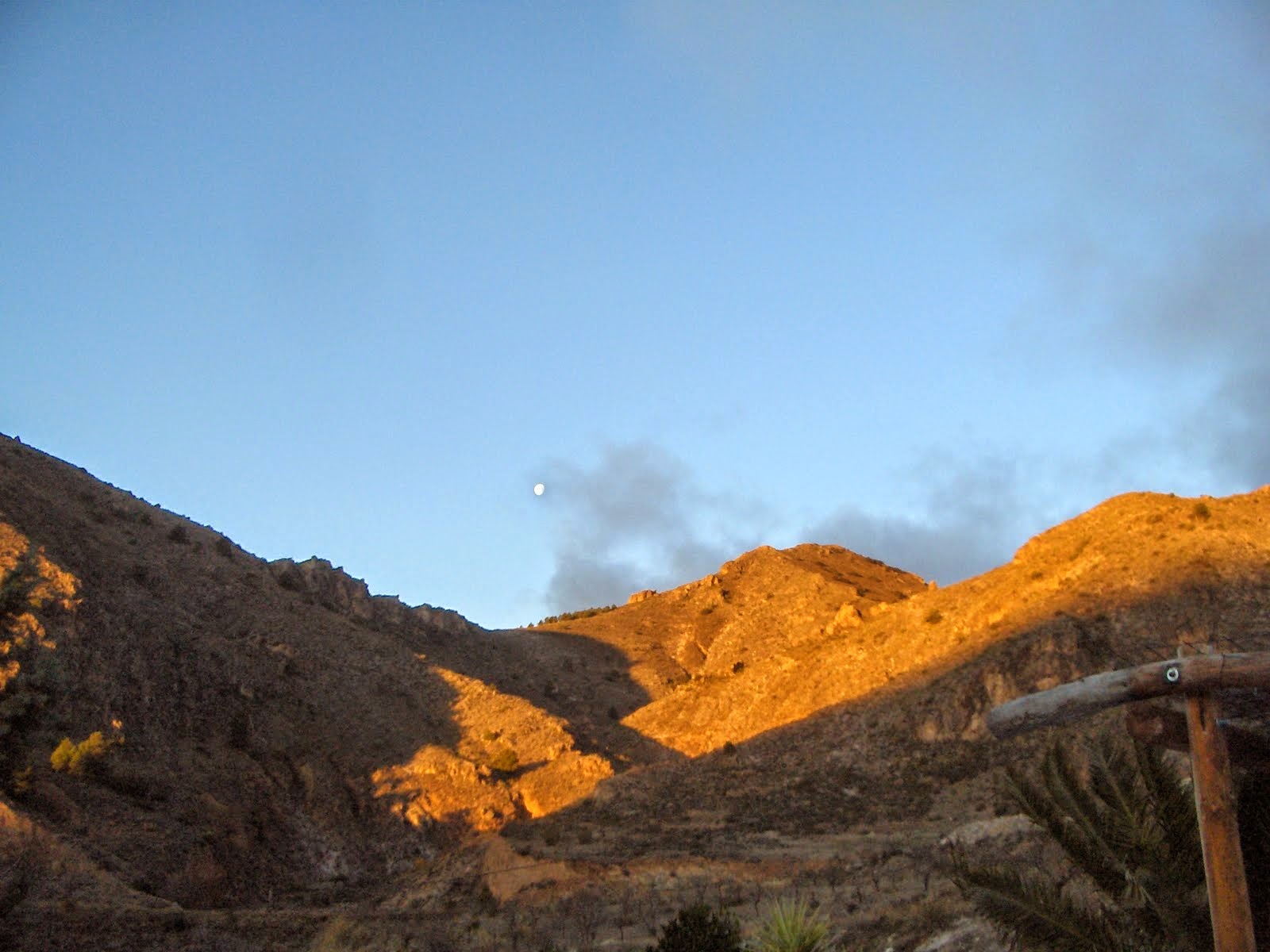 It was a warm evening so I was outside reading, and enjoying the tranquillity and scenery of the valley, as the sun started to disappear and reflect golden on the mountains.

Then my husky cross Millie started a low growl; the sort of growl she gives when, while not feeling threatened, everything is not quite how it should be. The subject of Millie’s disquiet were two of my neighbours, David and Gregorio who had arrived with baskets and a ladder to pick the cherries off the large tree next to the acequia. This tree is too large to be netted, so they needed to try and beat the birds to the ripe juicy fruit. 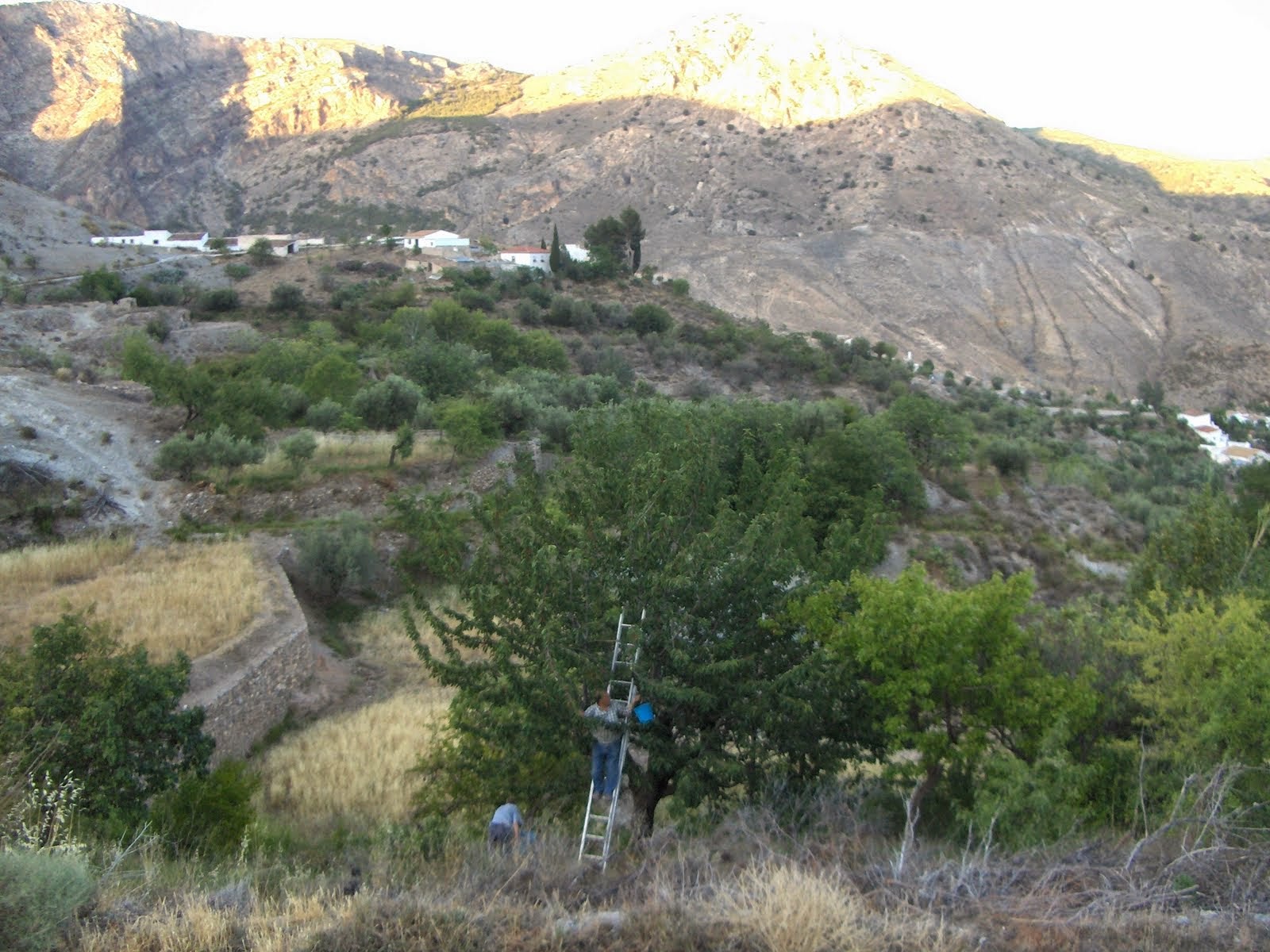 They could have employed the tree climbing scarecrows employed by other neighbours. Father Christmas and Michael Jackson! 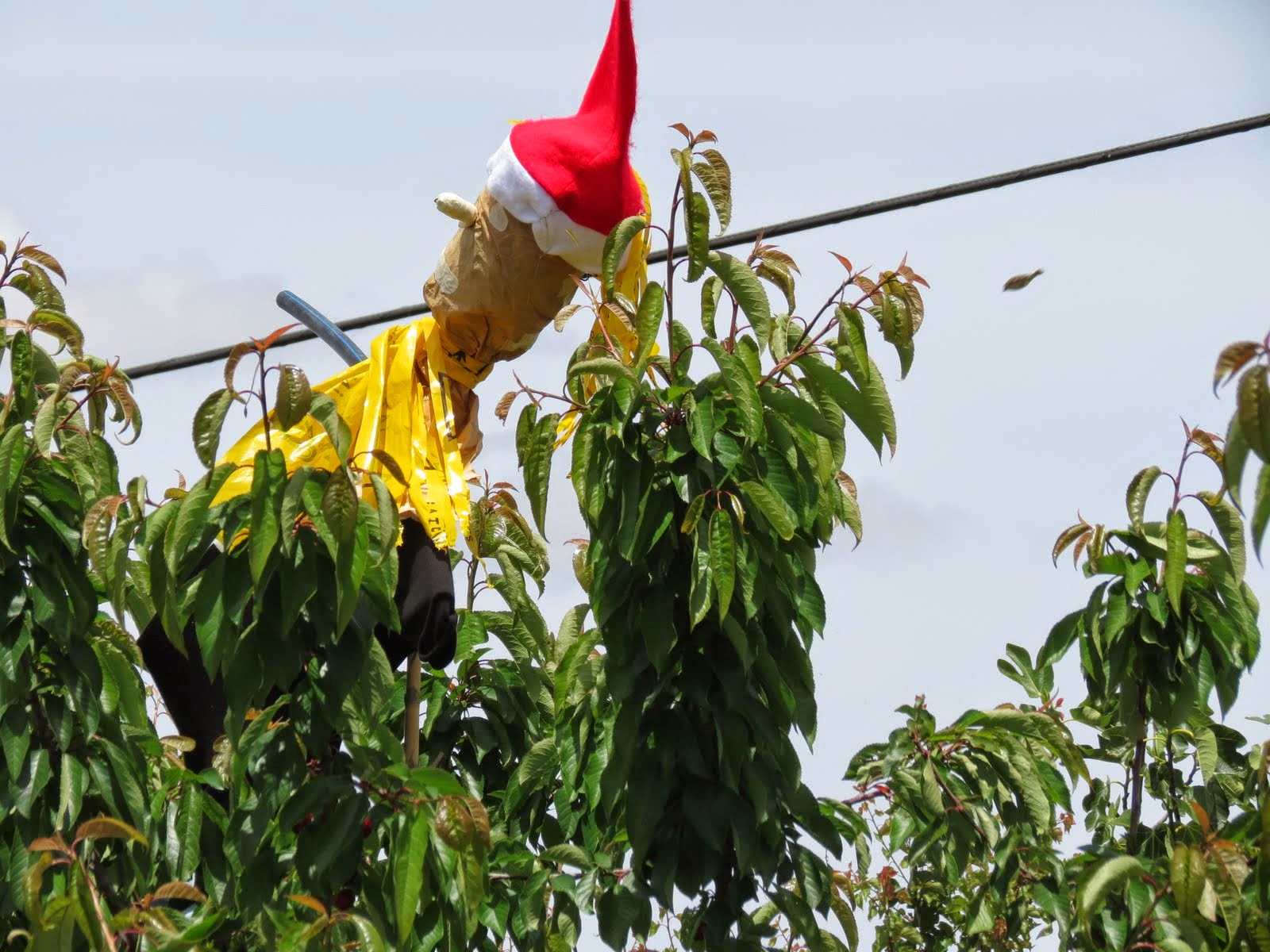 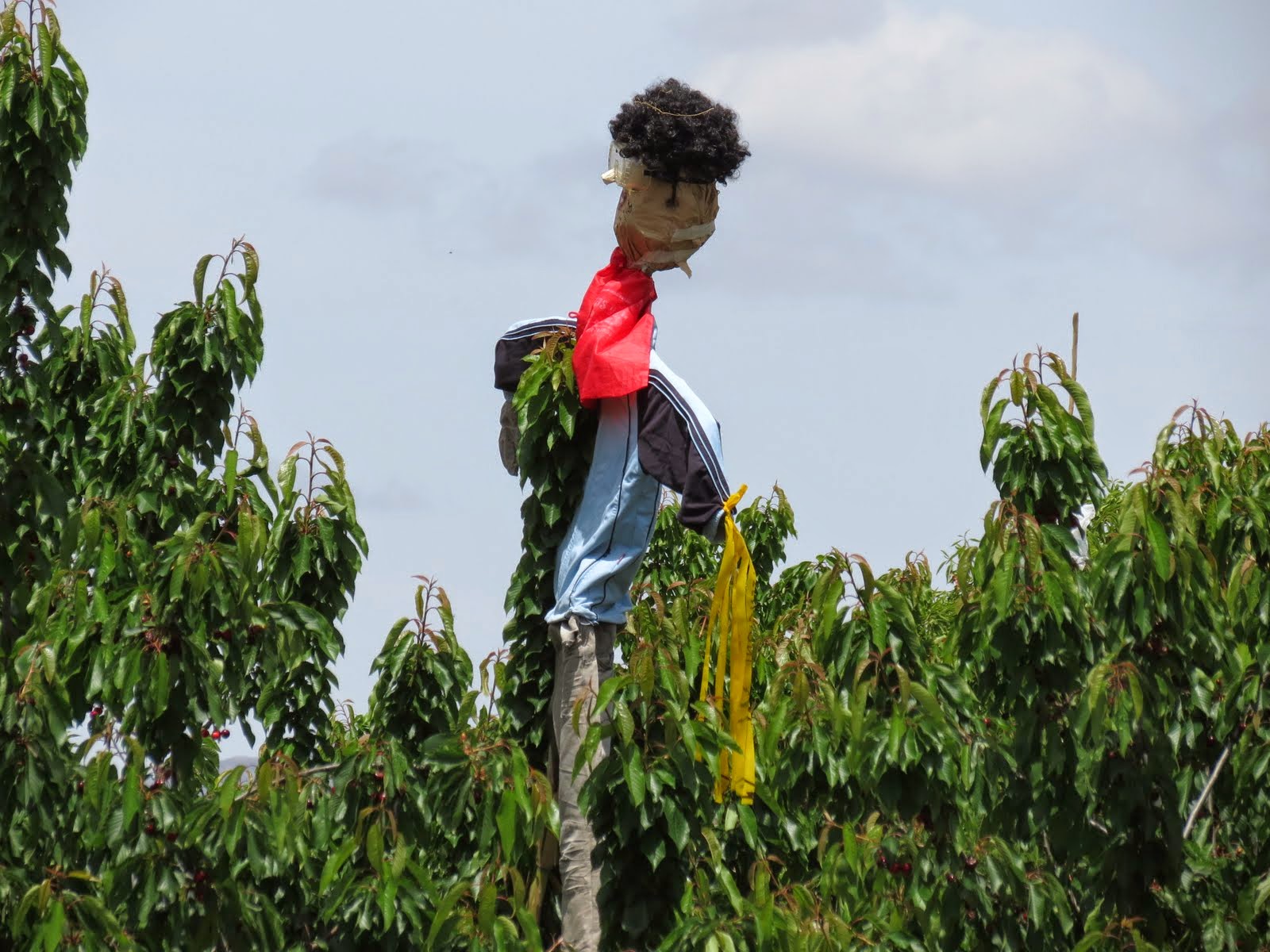 We too had some picking to do – apricots, which we will give away; stew and freeze; jam; dry and turn into chutney. 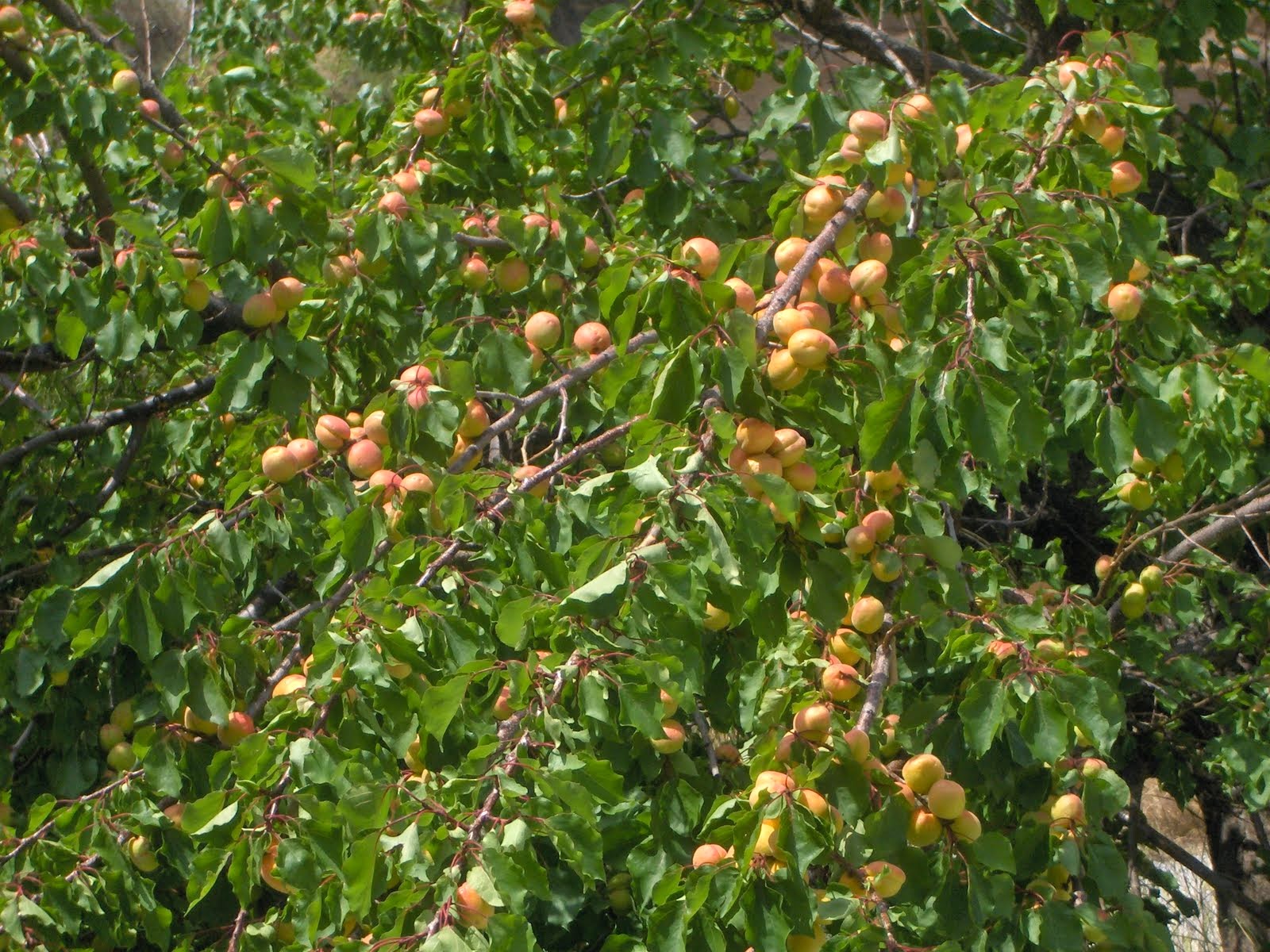 Two days of hot sun and the  dried apricots are ready. 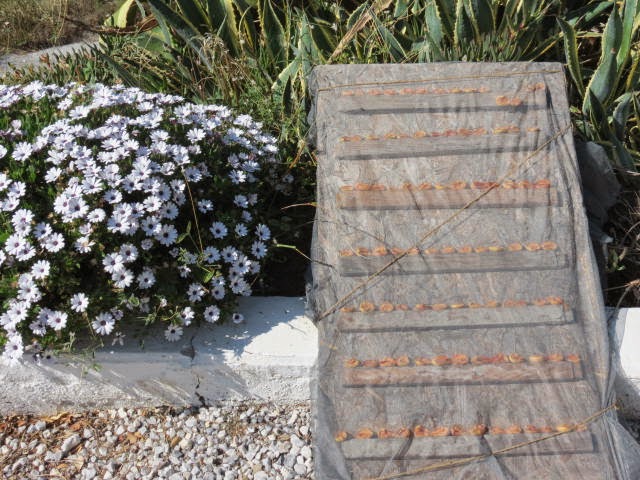 Flowers from the mountain

My neighbours (vecinos) are always up to something in the campo. Country folk do different things to  ‘townies’ like me, and because it’s Spain and my vecinos are Spanish, the things they do in the ‘campo’ are even more different!
They always know the season and the place to be out collecting from the campo – wild asparagus; herbs; mushrooms; scented plants and capers, to name just a few: The other evening I saw Francesca and Anna on the mountain side collecting something into plastic bags, and I wanted to know what was going on. My vecinos are very patient with me when it comes to my curiosity and ignorance. They explained that in Oria tomorrow there would be a Mass and procession for Corpus Christi (Ascension Day). They were collecting flower petals to scatter around the village. 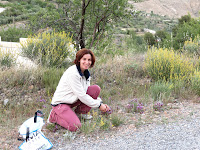 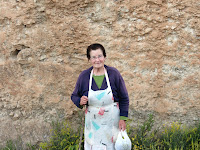 
A little later Isobel came past our Casa with her grandson Jose. They had been up to the fuente (spring) to light candles. I asked her if she would be going to Oria in the morning. She replied, “Of course, the village will be very beautiful with all the flower petals in the streets”, so we decided to go as well and take some photos. 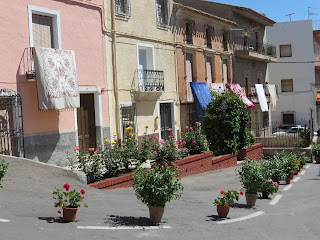 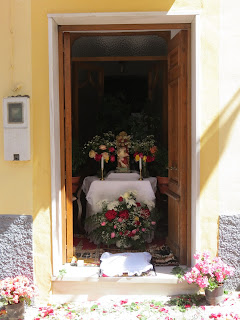 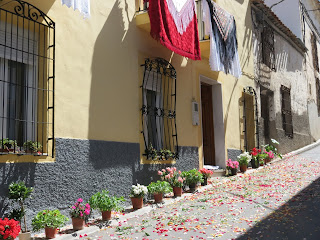 Possibly, “The best little potato patch in the whole world!”

Right at the start of this Blog, I said that it was about a place, where hardly anything ever happened, and that’s as true today, as it was when I wrote it. That’s perhaps why I haven’t been as prolific about writing about the place as I’d hoped to be.

However, something has happened this week, and I’ve got the ‘fotos’ to prove it.

It all started with the trundling of a JCB down the camino! Its’ hopper was filled with well rotted goat manure, and it was headed towards Andre’s huerta (vegetable garden); but not before Heth had bravely stood there to halt it, so that she could shovel out some, to feed our roses. 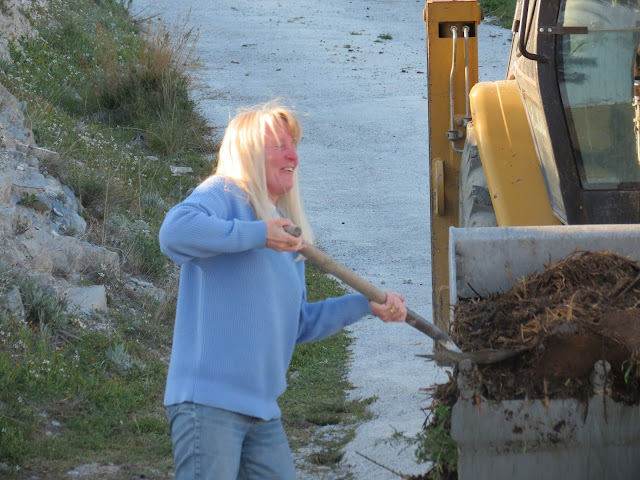 Next day I took the dogs for their afternoon walk, down the same camino. We went past the huerta, where Andre and Isobel had been joined by Antonia and Antonio for some 'team' potato planting.  Their mattocks were being skilfully wheeled to start the creation of the ridges that the emerging potato shoots needed, and the furrows, that would collect the water, from the balsa,  to swell the tubers. 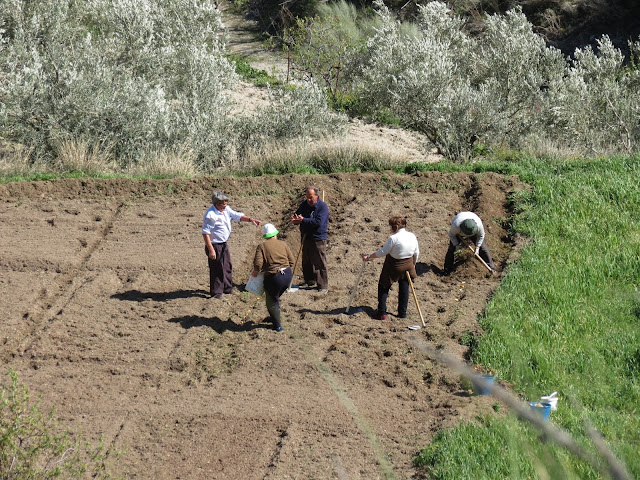 We went on by the balsa (a water tank fed by natural spring) and up into the closest almond grove. The almond blossom has all but disappeared now, but the emerging spring flora in the alpine meadow more than compensates.

Once there; I just sat on a rock in the spring sunshine, to peruse the valley below and watch the activity in the potato field. Everything was coming together according to experience and craft, learned and passed down over centuries. 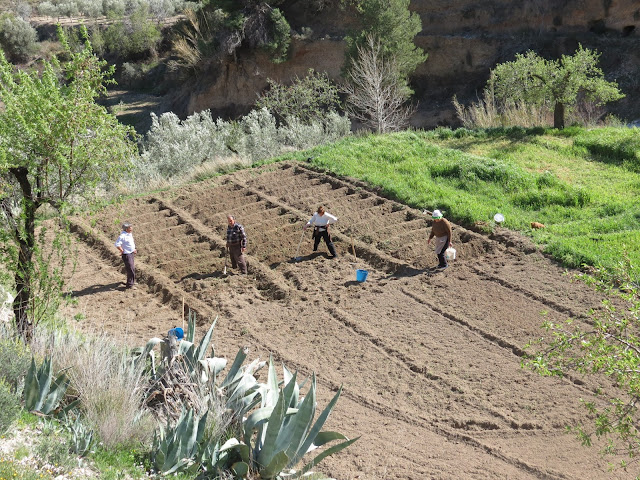 Meanwhile, the dogs did their usual things.

Holly raced up the mountain to chase rabbits, real and imagined, returning wild eyed and breathless. 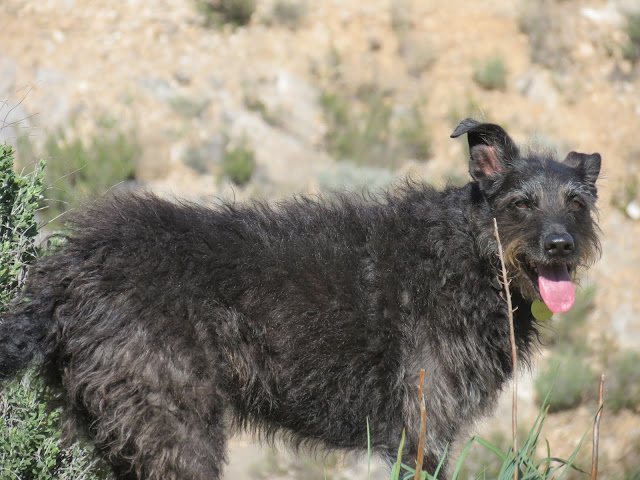 Millie just mooched around, fascinated by the lizards starting to emerge from hibernation, that scurried between the clumps of esparto grass. 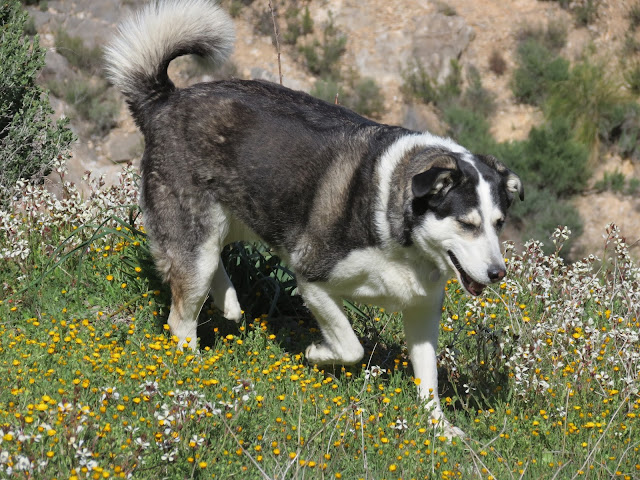 And all the while, down below, probably  the most perfect little potato patch in the world was emerging. 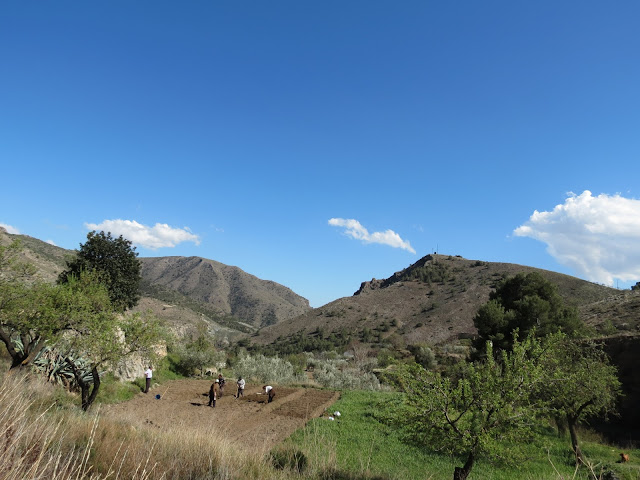 I love sitting out late in the warm evenings while the mountains slowly surround us with their shadow. I love to just sit taking in the sounds and the sights of the night. 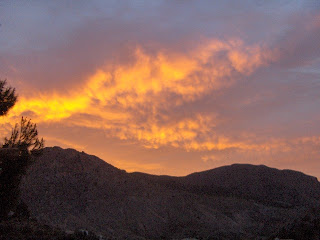 Once the bee eaters have made their noisy departure, few sounds break the peace, apart from the cicadas in the pine trees that create their symphony that ebbs and flows with intensity through the night. Sometimes, I hear the  Scops owls making their ‘poo..poo..poo’ cry, so characteristic of a Mediterranean summer night. There is an occasional dog bark or the sound of the Derbyshire birds that greet each other across the valley with a friendly ‘Hey Up, Hey Up’. That’s right - peacocks. 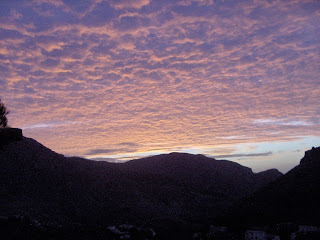 In Barranco de Quiles, There are no street lights to spoil the vista of the Milky Way or the constellations. A multitude of satellites track across the sky, and I enjoy the sighting of the International Space Station, that often crosses the valley in a matter of minutes, looking like a huge lantern. Nothing compares though to the thrill of seeing the shooting stars.

Every night of the summer the family of geckos comes to hunt the insects attracted by the dim wall light.

But tonight is a different night.

Around midnight, at the crown of the hill, dancing torchlights appear along the narrow road. Soon, I hear excited voices chattering and laughing in the darkness. The small group come down the dark lane, and disappears on round the bend. Then another group of people come along: then another: and another, and soon the barranco is filled with the sounds of people expecting a party! The fireworks that they light, erupt into the peace of the night - huge explosions! This is the Romería de Saliente!

These are the pilgrims heading off to the mountain top monastery and church at Saliente, which at 1501 meters is the highest mountain near us. 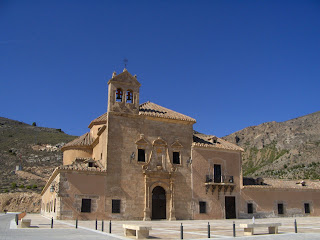 Each year, many 100's of people assemble in the bars of the surrounding towns and villages, discussing their strategies for the long nighttime walk, and taking the refreshment to help them achieve their goal!

Then they all converge on the beautiful 18th century mountain top church, which has been declared a monument of artistic and historical importance to celebrate in honour of the 'Virgen of Saliente'. They are joined by many 1000's of other pilgrims who arrive by car, and then undertake a shorter pilgrimage up the steep path, to lay thick carpets of flowers all around the alter.

An incredible sight!
Posted by pete at 07:47 No comments:

The sun hadn’t yet come over the mountain when I set off with the dogs for our morning walk. The air was a little nippy and I was glad that I have already got this winter’s supply of logs in. There were six and a half tonnes of cut olive logs delivered, that will fit straight into the central heating boiler without me having to spend hours toiling with chain saw and axe to make them fit. What a job it was to get them into the dry store. Fortunately, I was able to enlist the help of my mate Pape from the market who was glad of the work. 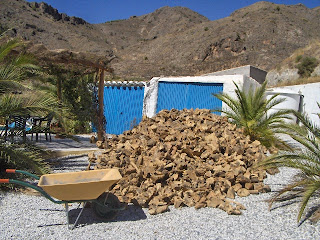 We went past the huerta where Esperanza grows her tomatoes, onions, beans and calabazas. I had seen her the other day in Oria and she had told me to help myself to any I wanted because she had all she needed.

Jose was out early too, directing the water flow from the acequia onto his small olive grove.

Soon we came upon Gregorio and Antonia collecting their almonds. They had spread nets under the tree and were beating the branches with long poles to bring down the nuts. 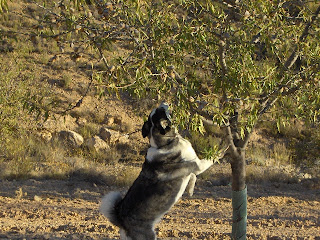 because soon the big almond grapping tractor which can strip a tree in thirty seconds will be visiting the nearby fields. 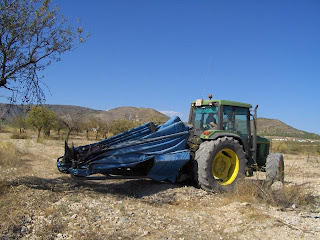 Then just before we returned to the casa we came across  Antonio collecting the ripe purple figs. I must remember to collect some of mine today, so that I can get them drying with the tomatoes in the still hot late summer sun. 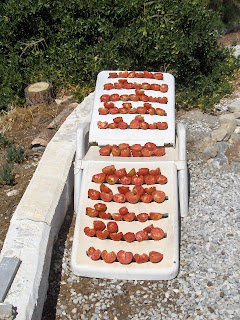